The Search Engine Wars: Google vs Yahoo vs Bing 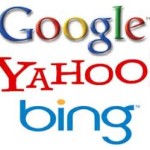 There are tons of different search engines out there, but there are only three widely used ones: Google, Bing and Yahoo! Despite the fact that all three are used for the same propose, they each provide you with different information. Searching the same keywords in one does not always bring up the same results as another. This can make finding the right search engine for you frustrating to say the least. So let’s compare these three juggernauts to see who is winning the search engine war!

All that being said, Bing still has a long way to go before it is number one. Microsoft is doing everything it can to get more users to use Bing. It has even started a campaign called “Bing it on.” Here you can compare Bing’s search results side by side with Google’s. After doing five searches, it lets you know which search engine results you prefer the most. There is even a new program called Bing rewards. This program actually rewards you for searching with Bing with points that you can redeem for gift cards.

Google
In the world of search engines, Google is king. Let’s face it; when you go to search something, chances are that you say you “Googled it.” There is not much to say about Google’s search engine that you do not already know. Google changed the way people search the Internet forever. One reason why people love this search engine so much is because it provides so many different services, and they combine together to make life easier for you.

However, one cannot be king forever. Google is always looking for ways to improve on its services. It may be the most used search engine right now, but it faces stiff competition from both Bing and Yahoo!. As far as search results go, Google’s tend to be the best. That being said, the other search engines are catching on and providing accurate results.

Yahoo!
My how the former king has fallen. At one time, Yahoo! ruled the Internet in terms of email and providing the best search results. Google eventually came along and stole the show with Gmail and its more powerful search engine. That does not mean that Yahoo! has died out, however! In fact, Yahoo! is in the middle of a major overhaul. In terms of Internet traffic, it seems to be working. Yahoo! now gets more unique hits than Google, and these hits are turning into people using their search engine.

If you have been watching Yahoo!, you will see that it is buying out a number of companies, including Flicker and Tumblr. Once again, its search engine is not being used as often as Google’s, but the fact remains that Yahoo! is still a power house and is gaining ground once again.